4 African leaders who were assassinated while still in power

Share on FacebookShare on TwitterShare on WhatsappShare on Telegram 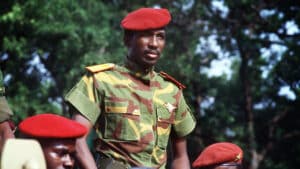 Sankara was popular with a considerable majority of his country’s citizens because he was a man whose vision was aimed at African self-reliance which made him an icon to many of Africa’s poor population.

While in power,  some of his policies alienated elements of the former ruling class and that made him an antagonist to many groups including the Burkinabé oligarchy, the tribal leaders — who were uncovered of their long-held traditional privileges of forced labour and tribute payments amongst others.

While his successors would repress journalists and newspapers, Sankara encouraged investigative journalism giving the media liberty to print whatever it found. This led to publications of government scandals by both privately-owned and state-owned newspapers.

It was about evening, when Sankara was having a meeting with his comrades, that heavy gunfire was heard outside the meeting room.

“It’s me they want.” He said, walking out of the room with his hands raised, to face the assailants. His body was consequently perforated with multiple bullets by troops led by Blaise Compaoré.

One of Thomas Sankara’s famous quotes goes thus: “You cannot carry out fundamental change without a certain amount of madness. In this case, it comes from nonconformity, the courage to turn your back on the old formulas, and the courage to invent the future. Besides, it took the madmen of yesterday for us to be able to act with extreme clarity today. I want to be one of those madmen.” 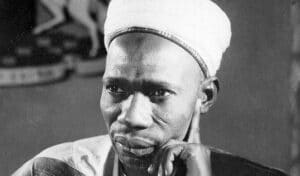 Often regarded as Nigeria’s national hero, Balewa was the first and only prime minister Nigeria ever had, Balewa’s reign saw a constitutional conference which adopted a regional political framework for the country, one that gave the three regions a significant amount of political freedom, which was composed of various cultural groups.

His term in office was somewhat turbulent and characterized by regional factionalism, electoral and ethnic violence among others, relentlessly threatening his government. Regardless, he played important roles in the formation of the Organisation of African Unity (OAU), now African Union. (AU)

On 15 January 1966, Balewa was overthrown and murdered in a military coup alongside many other leaders, including his old acquaintance Sir Ahmadu Bello. The circumstances of his death still remains uncertain.

What is indisputable is that he was abducted from his residence and was reported missing, till his decomposing body was later discovered at a roadside ridden with bullets close to Lagos, six days after he was ousted from office. Balewa was buried in Bauchi. 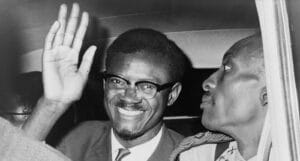 He dared the west but paid with his life. Lumumba was 34 when he assumed office as the first prime minister of the newly independent Democratic Republic of Congo. He played a significant role in the transformation of the Congo from a colony of Belgium into an independent republic.

A mutiny in the Congolese army broke out shortly after independence and a series of crisis began. While Lumumba sought support from the United States and the United Nations to aid suppress the Belgian-supported Katangan secessionists led by Moïse Tshombe, they all refused under the suspicion that he was pro-communist.

A military coup, saw Lumumba ousted from power and while he was attempting an escape to join his supporters who had established a new movement called the Free Republic of the Congo. He was captured and imprisoned by state authorities.

Lumumba and his associates were then executed by a Katangan firing squad, under Belgian supervision and in the presence of Katangan and Belgian officials and officers. Their bodies were then thrown into shallow graves.

One of his famous quotes reads thus: “We know that Africa is neither French, nor British, nor American, nor Russian,  that it is African. We know the objects of the West. Yesterday they divided us on the level of a tribe, clan and village. They want to create antagonistic blocs, satellite.” 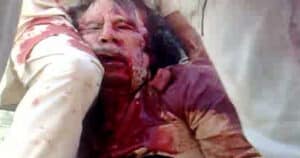 ‘What did I do to you?’ This were his last words, as he begged for mercy before he was gruesomely killed by rebel forces that captured him in his hometown of Sirte, following a NATO-backed revolution in 2011.

He seized power after a coup d’etat on September 1, 1969, and promoted himself from ‘‘Captain’‘ to ‘‘Colonel’‘ after a bloodless coup. Having taken power, Gaddafi converted Libya into a republic governed by his revolutionary command council. Ruling by decree, he deported Libya’s Italian population and ejected its Western military bases.

From 1999, Gaddafi shunned pan-Arabism, and encouraged pan-Africanism and rapprochement with Western nations; he was Chairperson of the African Union from 2009 to 2010.

There was a widespread protest against widespread corruption and unemployment in eastern Libya during the 2011 Arab spring. The situation descended into civil war, in which NATO intervened militarily on the side of the anti-Gaddafist National Transitional Council (NTC). Gaddafi’s government was overthrown and he was later killed by militants.

No Result
View All Result