Share on FacebookShare on TwitterShare on WhatsappShare on Telegram

At least once every year, Kano suffers a scarcity of tomatoes, a perishable commodity consumed by almost every household.

The shortage is usually a result of the lack of access to quality seeds, effective storage facilities, and poor processing infrastructure.

This leads to unrecoverable losses.

In February 2020, Alhaji Yusuf Mai-Katako, a resident of Kura Local Government Area of Kano was forced to abandon his decade-old tomato farming business to concentrate on rice production after losing over N200,000 worth of tomatoes.

“Two years ago, I harvested over 400 baskets of tomatoes in my 20 hectares of land. Unfortunately, I lost over N200,000 worth of tomatoes due to lack of storage to preserve them,” he laments.

His story is no different from that of Danjuma Idris Hamisu, a resident of Dorawar Sallau, situated in Garun Malam Local Government Area.

Hamisu lost 200 baskets of his harvested tomatoes due to the lack of a facility to preserve them.

“Last year, I harvested 600 baskets of tomatoes, but I lost over 200 baskets. The farming is not our problem, our problem is where do we preserve them.”

Recent data shows that Nigeria is the second largest tomato producing country in Africa after Egypt.

It is also the 13th largest tomato producer with 2.3 million tons. Unfortunately, over 40% of the product suffers postharvest losses.

Over 45% of their harvests get wasted as a result of the lack of storage and processing facilities, Sallau says.

“Every year over a hundred trucks of tomatoes are harvested here, but in the end, 40 to 45% of the product gets wasted.

“The government kept talking about diversifying the economy, but it fails to assist the real farmers. Please, we are calling them to assist us with process facilities,” he pleads.

This, and the existing gap between the average demand for the tomato and its production capacity has left Kano State with no choice but to import from Benue State, Plateau State, and some parts of Kaduna State.

Hike in Price of Tomatoes at Yankaba Market

A visit to the popular Yankaba Market, one of the biggest perishable food hubs in Kano, reveals the tremendous increase in the prices of tomatoes, with a plate selling for between N1,000 and N1,200 while a basket of the Benue brand of tomato sells for between N18,000 and N19,500.

A tomato buyer at the market, Rabi’u Isa Muhammed complains about the rise in tomato price, saying N1,000 tomatoes are no longer enough to make stew.

“The price has increased, you can’t even make a stew with N1,000 tomatoes. We are in a tight situation and God is the only one to get us out of this.”

A tomato dealer at Yankaba Market, Garba Sulaiman Na-Gandu argues that the prices of tomatoes did not increase as high as claimed by some of the buyers.

He however attributes the sudden increase in prices to the importation of the product from neighbouring states.

“Tomato is not expensive, it is even cheaper when compared to last three months when a basket was sold for N30,000.

“The little increase now was because we imported the tomatoes from Benue State”.

The chairman of the perishable goods section of Yankaba Market, Umar Ibrahim links the current scarcity to the rainy season.

“A basket is sold for N18,000 to N19,500. In a day we get about 5,000 baskets of tomatoes from Benue and some parts of Kaduna because presently we don’t have tomatoes in Kano due to the rainy season.”

The Founder of Bera Tomatoes, a tomato processor in Kano, Adaora Akojuru expresses concern over the short supply of adequate tomatoes for processing, largely due to postharvest losses.

“We lose almost 700,000 metric tons of tomatoes every year. This happened because we don’t have storage facilities and a reliable market, especially during harvest.

“As processors, we buy these tomatoes from the farmers during the harvest, and we process and preserve them.

“We hope government at all levels will support the activities of processors, especially those working along the tomato value chain”. 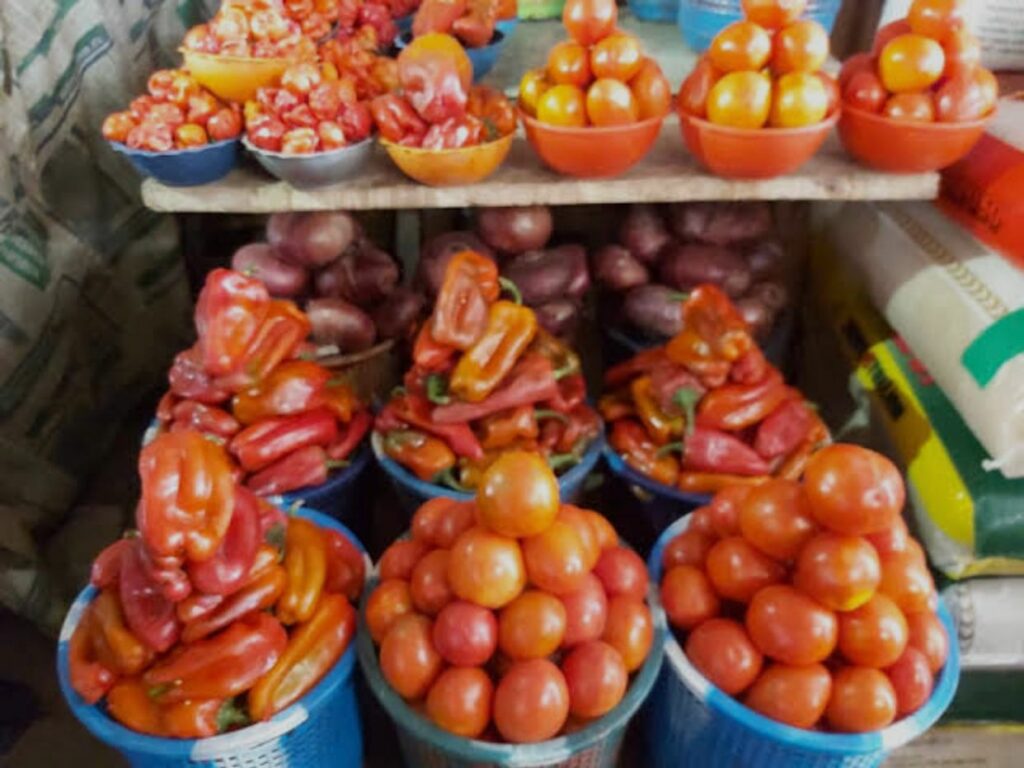 “The state government, in collaboration with some NGOs has provided over 30 tomatoes preservation sites in Marke, Gaya, Tofa, and other parts in the state”.

On his part, an Agriculturist at the Bayero University, Abdulwahab Salihu Shu’iabu says the institution has embarked on a project to breed varieties of tomato seedlings that can be farmed during the hot dry season.

“One way to address this challenge is breeding for heat-tolerant seeds. This is what we are working on now.

“We already imported samples of some of these seeds from Vegetable Research Centre, Taiwan.”

Shu’iabu further explains the project will take about three years, and expresses optimism that farmers would be able to produce heat-resistant tomatoes by the end of the project.

“The project will last for three years. So, by 2025, our farmers in the state will have heat-tolerant seeds that can be used to plant tomatoes during the rainy season.”